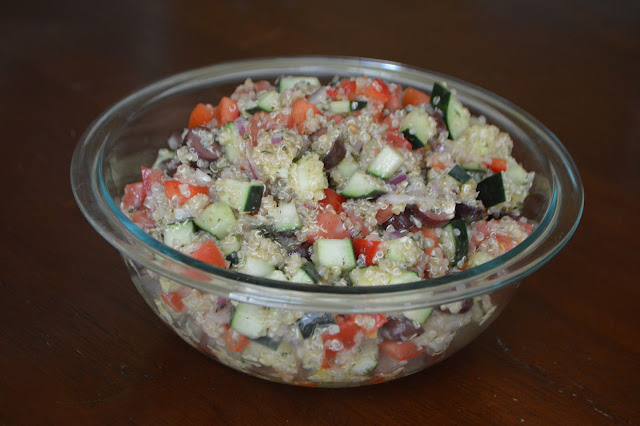 This quinoa salad was really easy to put together and has made for a great lunch! It keeps for several days which is a plus but I thought it would also make a great addition to any summer cookout or picnic! This recipe is adapted from Wholefully.

Stir the broth and quinoa together and bring to a boil.  Turn the heat to low, cover and let cook for 20-25 minutes or until the liquid has absorbed. Remove from heat and let cool for 10-15 minutes. Toss the cucumber, red pepper, red onion, tomatoes and kalamata olives with the quinoa. In a bowl whisk together the olive oil, red wine vinegar, honey, lemon juice, dried parsley, dried dill, salt and pepper. Pour over the quinoa and toss. Chill in the refrigerator for at least 1 hours before serving.