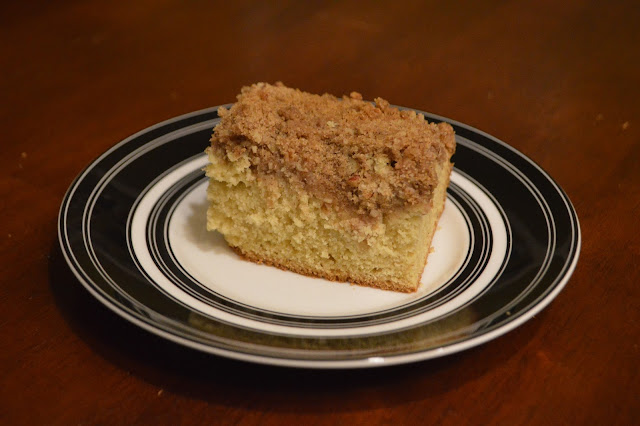 I love a good coffee cake but I find that if you buy one they are usually dry and not very flavorful. This coffee cake was soooo good though. I had to stop myself from taking a fork to the whole thing. This recipe is adapted from Bake or Break.

Heat oven to 350. In a small bowl combine all the ingredients for the crumb mixture using a fork and until it resembles coarse sand. Set to the side. In a medium mixing bowl beat the cream cheese and brown sugar together until fluffy. Mix in the vanilla, cinnamon and pecans. Set to the side.  Grease a 9×13 baking dish. Whisk together the flour, baking powder, baking soda and salt. In a separate bowl beat together the butter and sugar until light and fluffy.  Add the eggs one at a time then mix in the vanilla. Add the flour mixture in 3 parts until combed then mix in the sour cream. Spread the batter in the bottom of the greased baking dish.  Pour the cream cheese mixture evenly over top the swirl in with a knife.  Sprinkle the crumb topping evenly over the cake. Bake for 40-45 minutes or until cooked through. Remove and let cool before slicing.