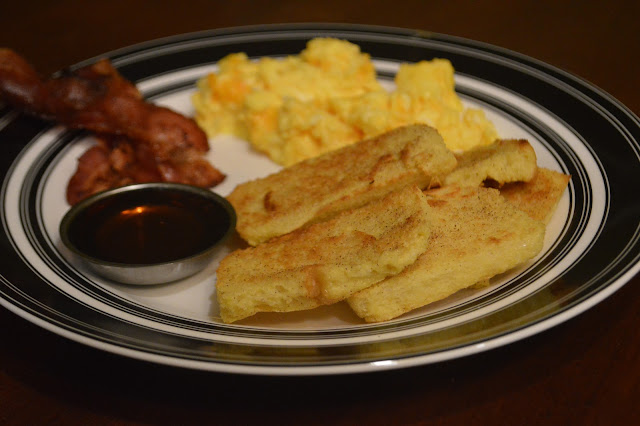 About a year and half ago one of my best friend’s got married. I was a bridesmaid in the wedding and that meant that Gray had both of our children in a hotel room all day.  Our youngest had just turned a year old and was also sick.  He had both of them at the hotel breakfast that morning and our oldest, who was still kind of picky at the time, was hungry but not happy with the options. He had never had french toast but Gray knew he would not be down with it at all so he told A that the french toast sticks were pancake sticks because he LOVES pancakes. A ate a ton of them and Gray and I have laughed and laughed about the “pancake sticks”.  When I saw this recipe I had to try it.  I have to say, they were great and we ate all of them! This recipe is from Cooking Classy.

Heat oven to 350. Line a large baking sheet with parchment paper. In a small bowl whisk together the sugar and cinnamon. In a medium size bowl whisk together the milk, eggs, vanilla and salt. Cut each slice of bread into three strips. Dip each stick into the egg mixture, let the extra drain off then place on the baking sheet. Once all of the strips are dipped and on the baking sheet, brush with half of the butter and sprinkle with cinnamon and sugar. Bake for 13 minutes. Flip the french toast sticks and brush with remaining butter and sprinkle with cinnamon and sugar. Bake for 13-18 more minutes then remove from oven. Let cool for 3 minutes then serve with syrup.